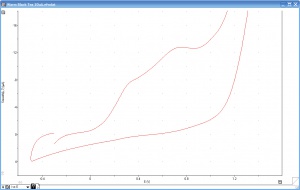 Cyclic voltammetry (CV) is used in evaluating antioxidants in the oil, food, diagnostic and agricultural industries.

CV is a rapid technique for measuring antioxidant levels and often requires minimal sample preparation. An electrode has an applied voltage is swept between two values. The current generated by the loss of electrons from the antioxidants leads to peaks in the current signal at given voltages. The voltage at which these peaks occur indicates the type of antioxidant, while the current peak height and area reflect the amount of antioxidant present.

Antioxidants are often a key ingredient in many skin care products. They are claimed to provide protection against exposure to pollution and UV radiation, to repair skin damage and to have anti-aging effects, Quantifying the level of antioxidants in cosmetic raw materials allows the formulator to choose adjust the level of protection offered by the product.

Cyclic voltammetry is an affordable, robust tool for measuring the antioxidant capacity of plants, extracts, and formulations. In addition to its role in research, it is well suited for collecting quality control data and optimising extraction procedures. It is a simple way to measure and document the antioxidant capacity of a given substance. Figure 1 shows the voltammogram of a cream base with 1.0% sodium ascorbate.

Many foodstuffs contain high levels of antioxidants. In fruit juices and plant extracts the main antioxidants are vitamin C (ascorbic acid), and an array of polyphenolic compounds. 'Staleness' of a food is often due to gradual oxidation (by air) leading to loss of the antioxidants, and monitoring of the 'total antioxidant level' in a foodstuff is often an indicator of its freshness and quality. 'Total antioxidant level' is usually quoted by referencing back to an equivalent amount of vitamin C (in aqueous samples) or vitamin E (for fat soluble antioxidants). The EChem Startup System has been used to perform cyclic voltammetry on a range of beverages. Figure 2 shows the antioxidant peaks (due to polyphenolic tannins) in the cyclic voltammogram of black tea.

CV with the EChem Startup System can be used for the analysis of antioxidant levels in blood plasma, which can be used to determine the effects of diet, stress, and infection in suitable animal models. Antioxidant levels can also be quantified in traditional medicines.