This application note describes the C4D Profiler in the PowerChrom software. The software tool is designed to help select the optimum operating parameters for your buffer/background electrolyte. The software automatically records the detector’s response at every combination of frequency, amplitude and headstage gain setting, and displays the data as a series of plots. This tool also provides a useful diagnostic tool in case of problems.

Before the C4D Profiler is used, the C4D unit should be on and connected to the computer. The C4D Profiler feature is automatically disabled when the software cannot detect a C4D unit.

The capillary should be injected with the background electrolyte you will use in subsequent experiments.

The C4D Profiler can be found in the “Windows” menu of the PowerChrom software. Its controls are shown in Figure 1 and described below: 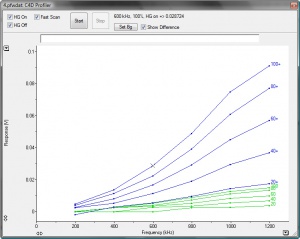 Figure 3 shows the background subtracted plots for a low conducting background electrolyte. It shows which C4D settings produced the highest output for the small change in conductivity, approximately 90mV at 100% amplitude, 1200 kHz frequency and headstage gain on.

In most experimental situations, the change of conductivity due to an analyte will be much smaller with typical signals in the 10mV range however the above test will correctly indicate the optimum C4D settings to be used.

It is generally advisable to choose parameters where the operation is still linear. In the example in Figure 3, suitable settings are 60% amplitude, 1000 kHz and with headstage gain on. In other words, find the maximum and then step back in both the frequency and amplitude to give the signal some room to move.

In some circumstances using the maximum excitation may result in the signal exceeding 2 V, at which point the detector reaches an electronic limit. In such cases a lower frequency/amplitude may be used, and in some circumstance, the headstage gain can be turned off. Cell conductivity is a proportional to the diameter and length of the measuring cell as well as the intrinsic conductivity of the buffer. This results in a very large range of conductivity values. Higher conductivities increase the current but also the frequency at which useful measurements can be made. Lower conductivities require higher excitation and higher gains.

The eDAQ headstages are configured to operate in typical capillary electrophoresis environments, but as you approach the extremes of conductivity, signals will either become too large or too small. We are prepared to modify our headstages (by special order) to adapt them to more extreme conditions.

The C4D detection method relies on the measurement of very small changes in conductivity due to analytes migrating through the detector. Unfortunately, conductivity in the detector can change for other reasons which are not always obvious. This can often causes unexpected peaks or shifts in the baseline.

In order to avoid or minimize these effects, the following precautions should be taken:

Temperature effects: Temperature directly affects conductivity and the changes which occur can have similar amplitudes as the peaks of interest. However temperature changes often show up as a slow step change or as a baseline drift. The C4D system itself exhibits negligible baseline drift. It is advisable therefore to allow the head stage and the capillary to stabilize at its operating temperature. This takes 20 to 30 minutes.

Pressure effects: applying hydrostatic pressure to the fluid in the capillary will cause transient baseline shifts due to subtle changes in conductivity caused by flow and associated temperature changes in the moving fluid. During measurements, time should be allowed for loading effects to stabilize.

Fluid discontinuities: Bubbles can come in different sizes and will cause excursions in conductivity. These can mimic actual analyte peaks but will, in all cases, cause a decrease in conductivity (negative peaks).

Mechanical effects: Moving the head stage or the capillary will inevitably vary the coupling between the capillary and the headstage and cause a baseline shift. External vibrations can also be coupled into the signal. It is advisable that the headstage be firmly connected to a stable mechanical support.

Electrical effects: The coupling between the headstage and the CE is dependent on very small values of capacitance whose value can be altered by external objects. For example, changing the position of the headstage can alter the baseline. External electrical noise can also couple through the headstage cable and it should always be rolled up into a minimum size and be constrained so that it does not move.

In conclusion, in order to obtain stable and repeatable results, ensure that the headstage, its connecting cables and the capillary are held firmly in place in a stable temperature, mechanical and electrical environment.