Plotting the IV Curve of a Solar Cell in EChem Software

This application note describes a procedure for plotting the IV curve of a solar cell using eDAQ EChem software.

The linear sweep voltammetry technique in EChem software can be used to plot the IV (current versus voltage) curve of a solar cell. The software can then overlay many IV curves recorded under different conditions. The EChem Startup System is an inexpensive, easy to use system for characterising solar cells.

The development and testing of solar cells (and other power generation/storage devices such as batteries, capacitors, and fuel cells) requires characterisation of the performance of the device under different load conditions. In days gone by this was usually done by connecting an electrical resistor (which mimicked an actual load) to the device while the voltage and current were measured. This was repeated for different values of resistor over the range of interest, which could mean that many resistors would be required.

Ohm's Law tells us that current is proportional to voltage divided by resistance, that is i = V/R, or put another way, if we know i and V than we can calculate R (using R = V / i).

Using a device called a potentiostat, we can control voltage and simultaneously measure the current. This means that a potentiostat can be used to characterise a solar cell by changing the potential across the cell and measuring the resulting current, and so can quickly determine the electrical characteristics for a large number of resistance values.

Video 2. How to remove the protective plastic coating on the solar cell with a soldering iron

The following equipment is required:

Figure 1. Positive and negative contacts on the solar cell

Determine the Open Circuit Potential (VOC) of the Solar Cell 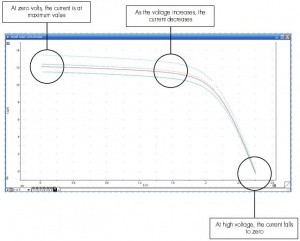