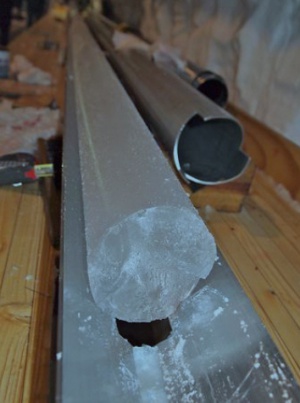 The eDAQ C4D was used to measure the very low conductivity of water melted from ice cores taken from the South Dome in Greenland.

Ice cores enclose a variety climate proxies that are valuable for understanding the past climate of our planet. These proxies include trace gases, salts, dust, stable isotopes and acids. Continuous Flow Analysis (CFA) is a method of measuring these chemical impurities by analyzing the water that derives from melting a certain piece cut from the ice core. The eDAQ C4D was used to measure the conductivity of shallow ice cores taken from the South Dome in Greenland. The results are compared with a bench top conductivity meter and with other detection methods of the CFA system as well.

This original research was conducted in 2014 by Maria Arvaniti, Anders Svensson and Paul Vallelonga from the Centre for Ice and Climate at the Niels Bohr Institute, University of Copenhagen, Denmark: 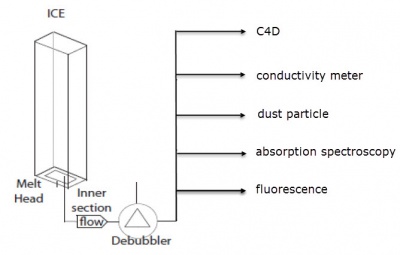 The performance of the C4D was tested for discrete measurements of conductivity using standards with a range of conductivity values typically found in ice cores. Various experimental parameters were then investigated and optimised, such as tubing material, tubing inner diameter, C4D frequency and detector response time.

The C4D was then used to measure the conductivity of water melted from an ice core. Figure 2 shows the Continuous Flow Analysis system. The ice core is placed vertically inside the melting unit over a heated melt head. This produces a steady stream of the melted ice core water. This is passed through a dedubbler to remove ancient air trapped in the ice. The water stream is then split and passed through the different detectors:

The absorption and fluorescence detectors are used for detecting the various chemical species incorporated inside the water sample. For example, calcium was detected using the fluorescence detector, while sodium and hydrogen cations were detected using the absorption detector. Conductivity and dust measurements are non-destructive methods used for measuring the bulk conductivity of ions and the dust content in the sample, respectively.

Some of the Equipment Required 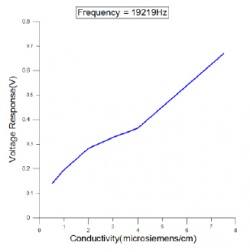 Various experiments were carried out to optimize parameters in the setup.

Figure 4 shows the conductivity profile for the South Dome ice core between 1960 and 2010. The black lines indicate peaks in both the conductivity and hydrogen cations concentration (not shown).

The conductivity of the South Dome ice core has two outstanding peaks between the years 1980-1990. They are 4-5 times larger than the mean conductivity range of the majority of data, and they match the hydrogen cation peaks recorded for the same years. Volcanic eruptions emit large amounts of gases and aerosols into the atmosphere, especially in the form of sulphuric acid and carbon dioxide. These large amounts of impurities injected into the atmosphere are deposited onto the surface of the ice, producing a higher conductivity signal. It is possible that the two peaks between 1980-1990 are volcanic signals, however, comparison with sulphate detection methods is recommended for further confirmation. 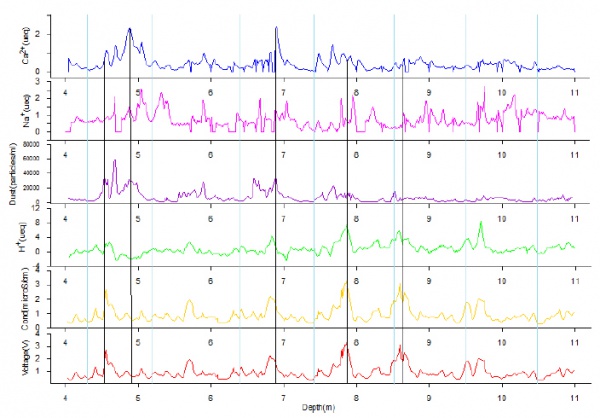