What are Tethered Membranes? 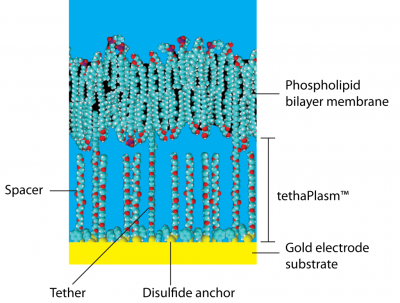 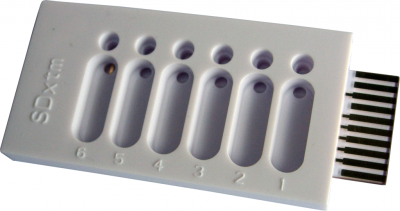 Tethered membranes are planar supported phospholipid bilayers held above a gold electrode by a set of hydrophilic polyethylene glycol (PEG) chains covalently bonded to the gold surface by organic disulfide anchors, Figure 1. A lipophilic alkane phytanyl group is bonded to the top of the PEG chain which acts as a scaffold around which the membrane lipids spontaneously cluster, eventually forming a continuous membrane.

Together the disulfide anchor, PEG chain, and phytanyl group is referred to as a molecular tether because it ties the membrane to the gold surface. In practice the tethers are separated from each other on the gold substrate by similar molecules, called spacers, that lack the lipophilic phytanyl group. These spacers sit under the membrane and do not have any direct contact with it. The tethers and spacers completely cover the gold surface but they are not closely packed as they are separated by the by the bulk of the organodisulfide anchor groups.

The average distance between the tethers and spacers can contain about 9 water molecules. The height of the membrane above the gold surface is about 3-4 nm (but 0.5 nm is occupied by the organodisulfide anchor).

Thus the space between the membrane and the gold surface is a mixture of PEG chains, disulfide anchor groups, water molecules, various cations and anions, and small water-soluble molecules, and is collectively known as the tethaPlasm™. It is analogous to the cytoplasm of a living cell. The application of a constant bias voltage can be used to 'charge' the tehaPlasm with an excess of cations or anions, prior to tethaPatch or tehaPod experiments (see below).

The ratio of tethers to spaces can be varied during manufacture. The standard tethaPlate™ uses a ratio of 1:10 which normally provides the best compromise between membrane stability and flexibility. Ratios as small as 1:100 have been used if greater flexibility is required, but less than this is not recommended as membrane integrity becomes unreliable. Conversely, ratios of up to 100% can be used if exceptional stability is required.

Tethered membranes are exteremely robust with the standard 10% membranes having typical lifetimes of months after preparation (if stored at 4°C between experiments). They are also very resistant to the electrical pulses and can withstand potentials within the range -500 to +800 mV, which is far greater than can be applied in traditional whole cell voltage clamping experiments.

A tethaPlate™ comprises six chambers each with a gold electrode (3.0 x 0.7 mm = 2.1 mm2) that has been pre-coated with tether and spacer molecules. Addition of a suitable phospholipid mixture is all that is required to spontaneously form the membrane. A second, uncoated, gold counter electrode sits 0.15 mm above the membrane but does not physically interact with it.

The tethaPlate has proven to be an exceptionally robust housing for the tethered membrane preparations which can be stable for stable for months when stored at 4°C, while many ion channel preparations will last for several days if not weeks (or more)!

Assembly of a tethaPlate and making a tethered membrane is descibed in Videos 1 and 2. 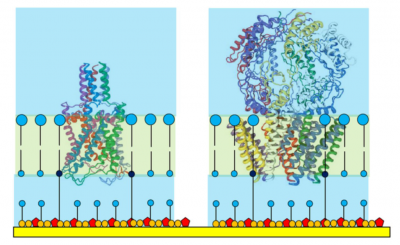 Figure 3. Ion channel proteins (MscL. left, and MscS) shown to scale in a tethered membrane. Note the orientation of the protein so that its 'superstructure' is housed ouside the tethaPlasm

Many proteins comprise lipohilic and hydrophilic sections and these affect the tertiary protein structure. Quite often the lipophillic sections are associated with a cell, or organelle, membrane and so the proteins are known are known as membrane proteins.

A special class of membrane protein is designed to facilitate the transport of cations or anions across the otherwise impermeable lipophilic cell membrane. Such proteins are known as ion channels.

The tether/spacer ratio of a tethered membrane dictates the maximum size of protein that can be housed. The standard 1:10 ratio has been found suitable for hosting protein structures up to 40000 Da (ie that part of the protein actually within the membrane) and these individual proteins may then assemble into oligomeric pore structures - which is often the final form of the ion channel in the membrane.

Note that even the small ion channel polypeptides, such as gramicidin (1882 Da) and valinomycin (1111 Da), are equally well accommodated in tethered membranes.

Larger ion channels, such as those shown in Figure 3, often have 'superstructures' that extend into the aqueous solution adjacent to the membrane. Even a moderately sized superstructure cannot be accommodated inside the crowded tethaPlasm forcing the membrane protein to adopt a preferred oriention (as often happens in a living cell).

Low molecular weight polypeptide ionophores and ion channels (such as gramicidin, valinomycin, magainin, alamethicin, and ionomycin) are available commercially in pure form. Larger proteins may be commercially available supplied in a detergent or lipid matrix. However most larger proteins must be custom made using bacterial culture, using genomic techniques either in-house or by a contract biotechnology company.

Typically the culture bacteria have the appropriate gene or RNA fragment artificially inserted into them so that they over express the desired ion channel protein. After several days of incubation the bacteria are harvested and the protein components separated and purified (often by gel electrophoresis). Whereas this was cutting edge technology in the 1990's these techniques are now well developed and widely available in proteomics laboratories.

The human genome itself is believed to code for about 400 different types of ion channel, and only a fraction of these have as yet been studied in detail. However, only a handful of ions - sodium potassium, calcium, magnesium, hydrogen, chloride (and other anions) - are relevant to the study of ion channels. The large variety of ion channels is required for different types of activity in different tissues. For example different potassium ion channels can be involved in action potential propagation in neve cells, the regulation of cardiac rythm, the response of cells to pressure changes (mechano-sensitive ion channels).

Similar ion channels occur in different organisms, however the structure is often slightly altered to optimise function as required by the species concerned. 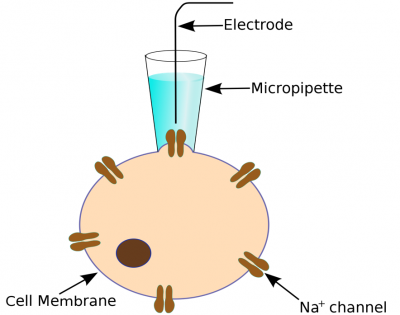 Both natural (such as ionomycin and calicimycin), and artificial ionophores (such as crown ethers, calixeranes, cryptands and other synthetic ion channels) can also be studied with tethered membrane systems. Ionophores are not always polypeptides and may be quite small molecules, however they must be at least partially lipohilic to ensure they can enter the membrane. Several ionophores have found applications as antibiotics, livestock growth promoters, and ion sensors.

The classic patch clamp experiment uses a micropipette electrode that is positioned against a cell membrane to cover just one, or a few, ion channels. Usually a prolonged trial and error process is required to get the electrode in the right position. The ion current signal is normally very small (a few picoamperes) and great care must be take to achieve good signal/noise levels.

Variants of the technique include whole cell and oocyte patch clamping where the signals from many ion channels can be recorded simultaneously. This gives a larger (and quieter) signal but may be complicated by there being several types of ion channel present.

In recent years automated patch clamps have entered the market but the technique is still hampered by the difficulty of positioning a micropipette electrode to get reproducible signals.

As mentioned above, the first years of the 21st century saw the raphid development of genomics and proteomics techniques so that it is now possible to isolate quantities of a single type of ion channel protein. This technology is now widespread in universities, research institutes, pharmaceutical company labs and hospital research departments.

For the first time studies can now be done on a 'routine' basis with reasonable quantities of pure protein giving a single type of ion channel. No longer are researchers restricted to making patches where only one or a several ion channel pores are being monitored. 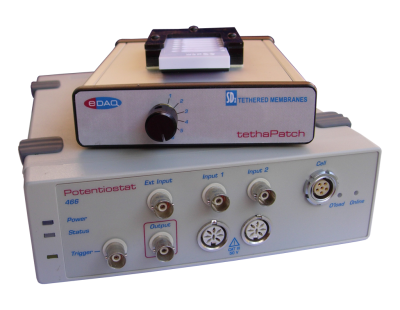 Figure 5. A tethaPatch unit sitting on an ER466 Potentiostat

By assembling a single type of ion channel protein in a large patch (2.1 mm2 area) of artificial tethered membrane membrane somewhere between 1 and 10 million channels can be studied in parallel. The measured ion current is the sum total from all the ion channels in the patch, so that signals in the microampere ranges are obtained with concomitantly low noise levels. Because the ion channels spontaneously house themselves in the tethered membrane which is already bonded to the working electrode there is no 'hit-or-miss' approach with a micropipette electrode.

tethaPatch™ techniques, while analogous to whole cell patch clamping, typically provide results in minutes that would otherwise take hours with conventional techniques. Also because the tethered membranes are very robust, voltage pulses can be applied that would otherwise 'blow' the seal of a traditional patch clamp preparation. Thus voltage-gated, and mechanosensitive ion channels, can now be studied over a wide range of pulse amplitudes (potentials between -500 to +800 mV can be applied) than previously achievable (typically less than ±300 mV), leading to new insights into the mechanism of ion channel behaviour.

The ER466 Integrated Potentiostat is suitable for use with the tethaPatch, Figure 6, for pulse generation and data acquisition of the current signal. 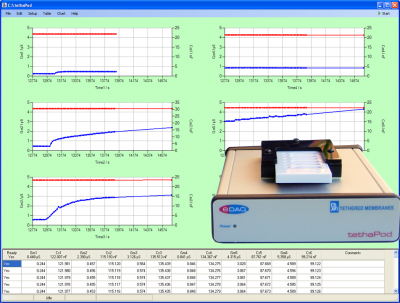 Figure 6. A tethaPod unit with its software in the background

tethaPod techniques take advantage of the relatively large signals provided by a tethered membrane system. By applying a small amplitude (20 mV) AC signal of varying frequency to the electrodes of a tethaPlate™, the membrane conductivity and capacitance can be directly determined. This is particularly relevant for pharmaceutical studies where continuous monitoring of membrane conductance can be done while various concentrations of ion channel blocker or actuator are added to the tethaPlate™. The results can then be analysed by dose/response methods enabling rapid screening of potential drug candidates.