Microchip electrophoresis is a separation method performed by applying a high voltage along a channel inside a small microfluidic chip or lab-on-a-chip. All ions (positive and negative) are pulled through the channel in the same direction by electro-osmotic flow (EOF). The analytes separate as they travel along the channel because of differences in their ionic mobility and they are detected by the C4D electrodes integrated on the chip near the outlet.

Contactless conductivity detection can be used for virtually all charged species: inorganic anions and cations, as well as organic ions, such as carboxylic acids, amines, amino acids, peptides, proteins, DNA fragments, antibiotics and many other pharmaceutical compounds. Tagging or other modification of the analytes is usually NOT required, while limits of detection are often comparable to, or sometimes even better, than UV-visible absorption techniques.

Microchip electrophoresis with C4D has been used for the analysis of cation, anions and for the study of electro-osmotic flow. 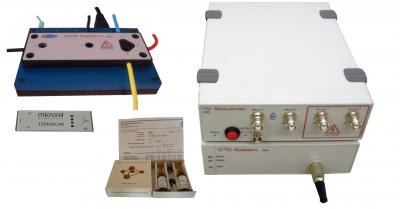 For microchip electrophoresis researchers with existing systems, the ER430 High Voltage Sequencer can be integrated into your setup. The sequence of high voltages is fully controlled using either the eDAQ QuadSequencer software or third-party software such as LabVIEW, WinWedge, or HyperTerminal..
The analog signal from UV and fluorescence detectors can be recorded using the C4D Data System, PowerChrom or e-corder systems, and the data analysed using PowerChrom or Chart software.